Mr. Wiesner is the owner of John Wiesner, Inc. a Buick Pontiac GMC franchise in Conroe. He was born in Richmond, Texas and raised in Hempstead, Texas. He is a graduate of Southern Methodist University where he was a member of the Alpha Tau Omega Fraternity. He is married to the former Elizabeth Sorsby of Hempstead and they have three sons, Don Edd, Howell, and John III (deceased). They are the proud grandparents of six grandchildren and one great-grandchild. They are members of First United Methodist Church.
John moved to Conroe in 1972 when he took over the Buick Pontiac dealership and started what is now John Wiesner, Inc. with 10 employees. Today that facility has over 500 employees working for the Wiesner Group with locations in Conroe, Huntsville, Tomball and Rosenberg. His highly successful business has won many honors and awards throughout the years.
Involvement in the Chamber of Commerce and the community has played a key role in Mr. Wiesner’s activities since moving to Montgomery County. He was a strong supporter of the creation of North Harris Montgomery Community College, having chaired the committee which created North Harris Montgomery Community College District in 1991. He continues today to serve on the Foundation Board. He supports the YMCA, Montgomery and Walker county Fairs, along with other youth activities in the area. He believes by investing in the youths of today we are helping to build a strong tomorrow. 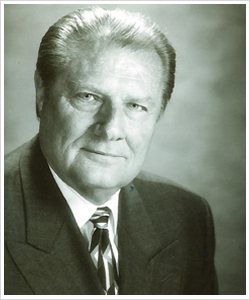 Back to Wall of Honor Page